While the decision to homeschool might affect your child in many ways, it never ceases to amaze me the amount of people who still believe that kids are shy (or loud. or talkative. or introverted. or…) simply because they’re homeschooled.

You’ve probably dealt with this, too. Let me give you an example from our experiences.

Recently, one of my sons was involved in a group “thing” with a bunch of kids around his age. Apparently his level of participation wasn’t on par, and I was pulled aside for a chat.

“Just keep encouraging him to participate…I want to see him make friends,” I was told.

And then came the zinger: “I know the adjustment to group things is hard as a homeschooler.”

Ten or so possible responses floated through my brain, but I went for the smile-nod-ignore tactic.

It’s what happened next that doesn’t line up.

Twenty minutes later, a girl in the group was asked for a response to a question—nothing terribly difficult. Her eyes got huge, she stared at the floor, and I seriously thought she was going to cry.

The crazy thing was the difference in how the adults and other kids responded to her actions.

There were no cries of where she went to school or who was teaching her to do algebra or recite the preamble of the Constitution.

There are very few things that make me want to flip tables, but this is one of them: when two kids do the exact same thing and you blame homeschooling for one kid’s actions and personality for the other.

Apparently I’d already written about this same issue a long time ago. In the early days of The Hmmmschooling Mom blog, I posted this (with these pictures):

Why is it that when my son is shy, it’s because he’s homeschooled and doesn’t know how to act around people… 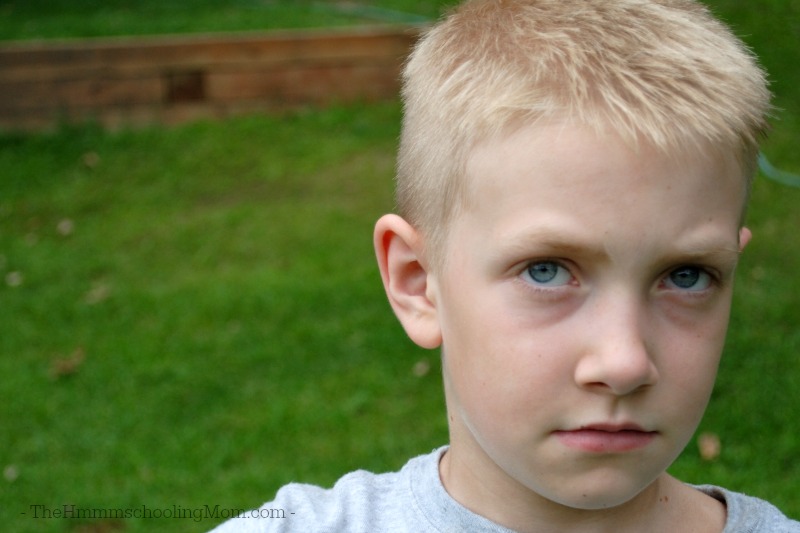 …but when a publicly schooled boy is shy, it’s his personality?

Conversely, why is it that when my son is loud, wild, rambunctious, or crazy in public, it’s because he’s homeschooled and hasn’t been taught any social skills... 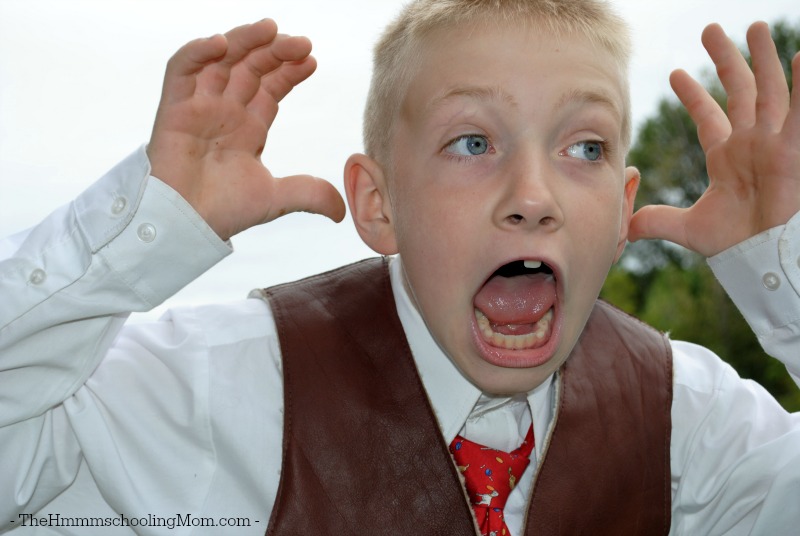 …but when a publicly schooled boy is loud, wild, rambunctious, or crazy, it’s because he’s just being a boy?

It really bums me out that almost 6 years after originally posting that, I can still ask the same. exact. questions.

It’s because they’re homeschooled: because there is no one like that in public school (Or..wait. Um…)

Yeah. I never knew anyone like that in public school.

A friend told me once about her child being told he was acting “totally homeschooled” because he was in a group and continued to talk and talk and didn’t know when to stop.

Never knew anyone like that in public school either.

I once saw a boy request to sit out of a group activity. Another parent (who didn’t know we homeschooled) turned to me and said, “You can tell he’s homeschooled. Never wants to get involved in the group. I mean, do they not even like people, or what?”

Nope. Never ever dealt with anyone like that in public school.

Society tends to latch on to homeschooled as a reason when kids don’t function in a group (because they are either too quiet or don’t know when to be quiet) but if a publicly schooled kid acts the same way, it’s their personality or due to some alphabet soup, XYZ diagnosis.

I’ll give you some letters to attach to that. How about B and S? 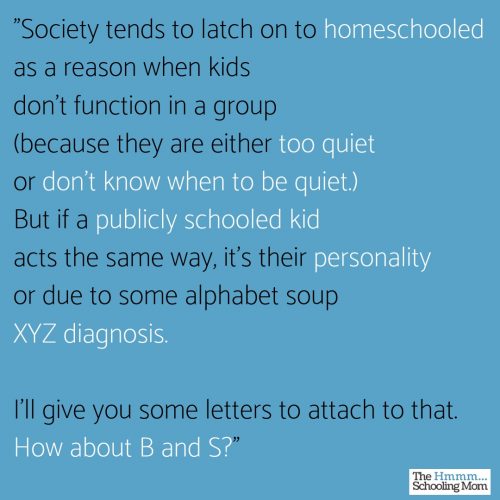 There are kids who like to talk and kids who won’t be quiet and kids who only talk when they really have something to say in both public school and homeschool.

There are kids who are the first to jump in and lead the way and figure out how to get things done and there are kids who sit back and wait for someone else to tell them what to do in both public school and homeschool.

Perhaps we could accept the fact that some kids are quiet and some kids aren’t. Shoving a quiet kid in a group isn’t going to suddenly turn them into a chatty kathy—no matter how many times you do it. Making a talkative kid spend time by themselves isn’t going to kill their urge to communicate.

We have to stop using the excuse of where someone goes to school to explain everything about who they are and how they act, regardless of whether that is to describe fabulous behavior or not so fabulous behavior.  This goes for everyone—kids who are homeschooled and kids who attend public school.

Or maybe, just maybe, we could stop constantly assessing the way a kid responds in a group and acting like it’s something that needs to be fixed or awarded with a gold star.

But if we didn’t have to assess and control and evaluate and judge and compare and fix kids…what in the world would adults have to talk about? 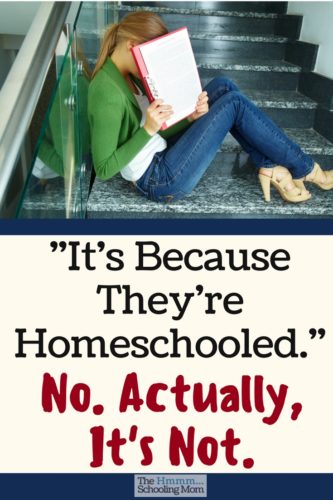 61 thoughts on “It’s Because They’re Homeschooled: No, Actually It’s Not”