5 Tips to Help Your Kid Rock at Music 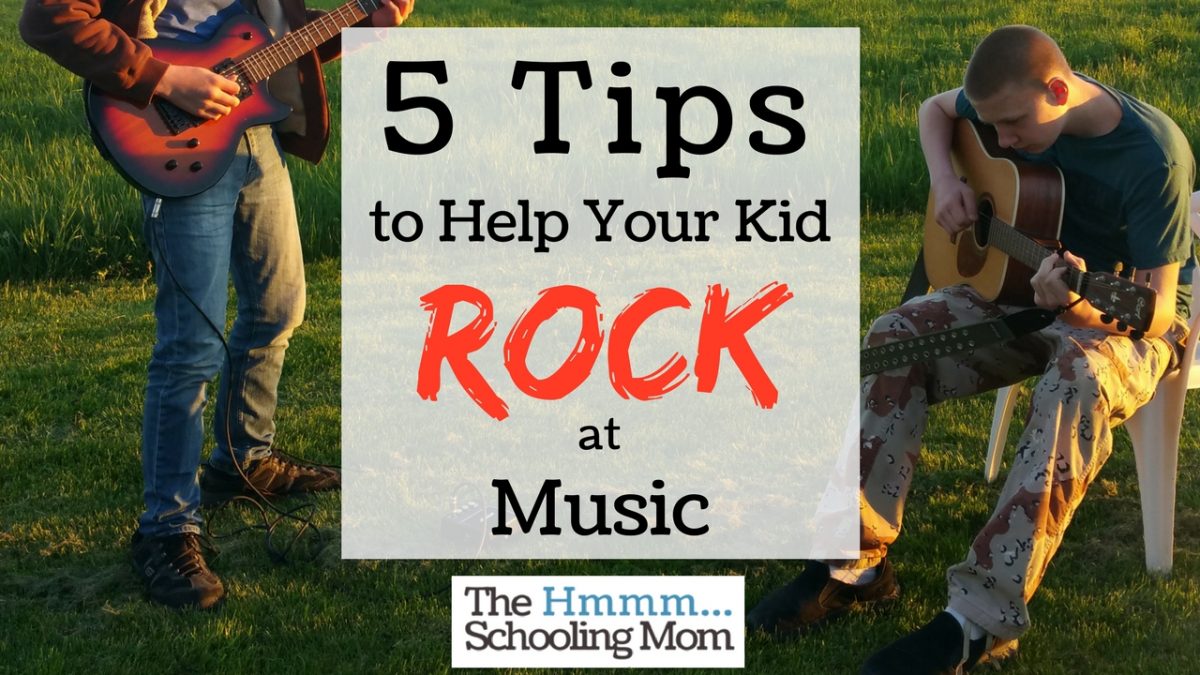 I received a copy of Garage Band Theory free and was compensated for my time. Opinions belong to my sons and myself and we were not required to give a positive review. Rock on, fellow musicians. Rock on.

As a guitar-playing, singing mama, I was very excited to teach my kids about music right away. As a new homeschooling parent (almost a gazillion years ago) I ordered various musical education curricula in some effort to teach my children basic music “stuff” and pique their interest in playing an instrument.

They didn’t want much to do with it.

But something amazing happened with them in the last year and you guys, they are never more than three feet from their instruments. These teenage boys play constantly. How did we make that happen? 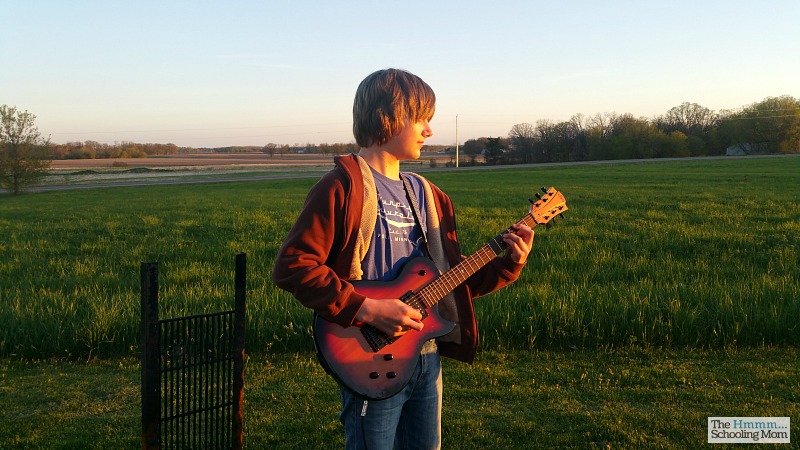 They’ve become obsessed with learning to play, but it was a backwards sort of journey to get there. Many people encourage their children to choose an instrument, haul them to lessons, force them to practice said instrument…I mean that’s the way you’re supposed to learn to play, right?

1. They have to be ready and want to learn to play music.

Trying to teach your kids something like music when they aren’t ready for it or have no interest is a little like someone trying to explain to me how to tear down a motor. I don’t care, and I’m most likely not going to remember what I’m taught.

When music became a thing my kids were actually interested in, they wanted to know more. The interest drove the education. Music (and eventually, guitar) became this force in their life they couldn’t ignore, and they had to feed it with how to and how come and how can I do this better?

2. Playing music has to be enjoyable.

Not that every single aspect of learning to play an instrument is fun (hello, building up callouses on your fingertips), but playing music for pleasure is a game changer. When playing guitar became something my kids enjoyed doing, they were inspired to learn more about it. When playing an instrument or learning another song or figuring out a chord progression is something they enjoy doing and isn’t something they’re only doing to appease their instructor, it’s a completely different experience.

3. They need to have hands-on musical options.

Sometimes the thing that will get your child interested in playing is the fact the instrument is right there and available to mess around with.

We have a wall of instruments at our house. At the beginning of this year, the wall of instruments (which no one necessarily plays hardcore) included a dulcimer, a banjo, two mandolins, three acoustic guitars, a violin, an electric guitar, and a keyboard—and only one of those items was bought brand new. Since our boys started playing, we/they have added three more electric guitars and a bass guitar to that collection—again, none of them brand new.

Check thrift stores, pawn shops, and social media for instruments for sale. Put the word out that you’re looking to build a collection. The instruments you learn on don’t have to be expensive, brand-new, or tip top of the line. Give a new life to that guitar that’s sitting in your uncle’s closet that he never quite learned to play.

5. They have to have the right musical tools.

My kids have learned a ton about guitar techniques through various videos online and also through just messing around. I mean, when you have a guitar in your hand for 3/4 of the hours you’re awake, you tend to pick up on some things. But one day my oldest said, “Mom…I’d really like to learn more about music theory.”

After he helped me pick my jaw up off the floor, he explained that learning music theory would actually help him play better, write his own songs, and understand why notes worked together the way they did.

My youngest chimed in, “yeah, because if I could understand scales, then I could really shred on the guitar.”

Shredding, my friends, is a good thing. Boys, let me introduce you to a little thing called Garage Band Theory.

As fate would have it, I was lucky enough to stumble upon Duke Sharp’s Garage Band Theory book a week after this conversation. 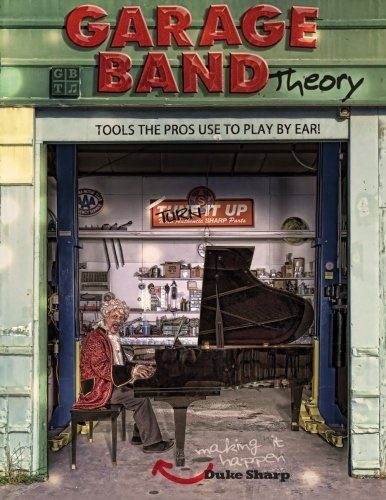 Duke’s book is a hefty text on music theory and the “tools the pros use to play by ear”. Y’all, there is so. much. information. in this book. It’s written in a very conversational tone so although it’s admittedly a very long book, it’s not a chore to read. (Having said that, it’s not meant to be a book that you sit down and read from beginning to end. Duke clearly states that it’s perfectly okay to pick and choose and skip around. Take the info you need and get ready to rock!)

What my boys loved best about Garage Band Theory—hands down—was the tabs. How often do you find a music theory book with so many different tabs? My boys can look in Garage Band Theory and find guitar tabs and mandolin tabs and banjo tabs for various different scales and arpeggios and songs and not have to covert everything from the piano. To be able to look at the musical staff and see how that relates differently to every instrument in our house? This was huge for them. They can’t stop opening this book.

The sheer volume of little tips and hints throughout this book makes it a keeper. I’m not going to lie—even as someone who has been playing guitar for (ahem) 30 years, I still picked out things that will help me in both my playing and the understanding of how music is put together. In my sons’ quests to become better guitar players, it’s looking like some of it may just rub off on me.

We are continuing to work through our copy of Garage Band Theory, and with the already dog-eared pages and bent cover, it’s safe to say it has already been well loved.

And now they are playing scales, y’all. And totally shredding it. 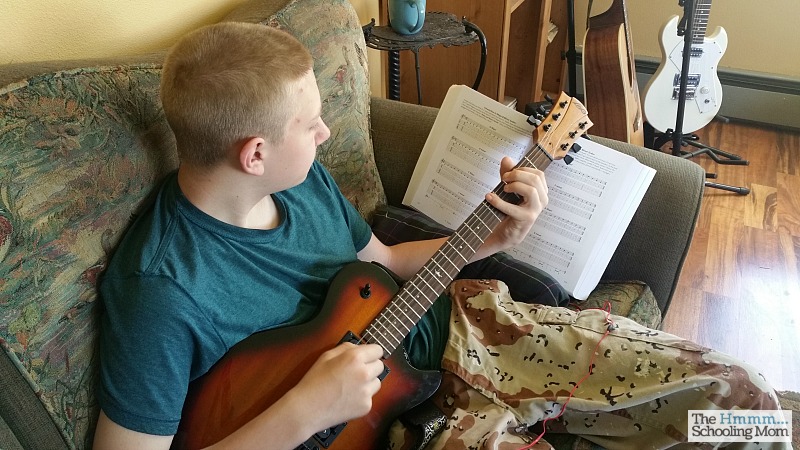 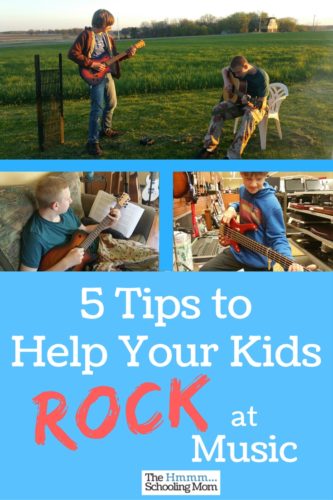