Since my sons have always been homeschooled and are now teens, I often have families that are considering homeschooling their kids, as well as families several years behind us in the journey, reach out to me for some reassurance that homeschooling works.

Which is to say…what, exactly? Because like the homeschool socialization question, or the are your kids prepared for their future question, I think many people ask without stopping to consider what information they’re really seeking when they ask if homeschooling works.

In order to know that homeschooling works, you have to define a few things.

Consider this: how will you know if homeschooling works? Because it’s different for every homeschooling family. Whether or not it works for you will depend on how you define it working, which usually has a lot to do with why you decided to homeschool.

Generally speaking though, I think the immediate path our brain goes down when someone wants to be assured that homeschooling works, is academic. And I get it. We tend to proceed in the same educational path we came from—even if we don’t immediately realize it—until we are challenged to look at our path differently.

But if homeschool success for you is completely defined by knowing all the things, or being able to answer correctly when someone quizzes you on the planets or the presidents or a random multiplication problem…you’re still functioning under a public school frame of mind.

I mean, if your main measure of homeschooling success is that your kids get into the college they want, then—in all honesty—public school could possibly work, too. Because public school kids get in to amazing colleges all the time.

So, what are we actually asking when we want to know if homeschooling works?

In public school, I was one of those kids who would do extra credit for the sake of getting over 100%, and 9 times out of ten aced whatever test I was given. If you base my public school experience off those classes, public school works.

But, y’all, I squeaked by Algebra 2 my junior year of high school with a D-…and I think that was just because the teacher was being nice. If you based my public school experience on that class, it would be easy to say that a) I was a bad student and b) public school doesn’t work.

See, academics are only part of the answer. And the longer that a parent homeschools, the easier it is to see that.

How do I personally know that homeschooling works?

There will always be those times we question our decision to homeschool. That’s part of being human. There will always be what ifs and how would things have been different if we had chosen a different path. I think it’s healthy to question it every so often, and compare it to you your original homeschool mission statement to figure out if you’re on track with what you intended the homeschooling experience to be for your family.

And yet, even with the questions, I would agree that homeschooling works.

So how can I confidently say that homeschooling works for us? Here are five reasons—along with me playing devil’s advocate about them—which, I promise, has a purpose. 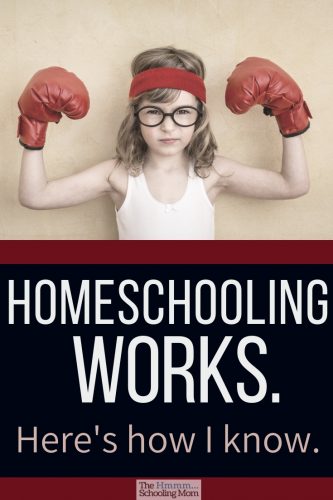 1. My kids can converse with people outside of their peer group. Not only that, but my kids aren’t hiding in the corner. Quite the contrary—my kids can get up in front of hundreds of people and rock out on stage .

But…could that be true of public and privately schooled kids as well? I mean, I knew a few classmates in high school who could have sold ice to an Eskimo and got a 20% tip while they were at it. And—if you watched the rock concert video linked above (hint, hint)—how in the world would anyone know which kids in that band were homeschooled and which weren’t?

2. My kids get along really well and want to hang out with each other—to the point that when they were younger, I’d sometimes threaten to separate them because it was like having two best friends sitting next to each other in class, whispering and giggling and not paying attention to the teacher.

But I knew (and know!) lots of families in public school who got along really well. I also know a lot of homeschooled families whose siblings annoy each other to no end.

3. I’d say my kids are academically smart in lots of ways. I mean, I had to Google some of the words that my oldest used in his paper on mythology last week.

But friends, there are lots of smart kids in public school as well. There are honors and accelerated and college level classes in public school for a reason. There are plenty of kids who are ahead or behind or right on track, regardless of who they turn their work into.

4. My kids want to learn. They constantly seek information about whatever they want to know more about.

But, let’s be honest—we live in a time when everyone can get information about anything with the swipe of a finger or click of some keys. The world is different now. We’ve all got access to answers at the touch of a button. And while some homeschoolers may have more time to access it, they don’t get the monopoly on it.

Consider this: how is it that my kids know more about Nirvana than I do—and I was rocking out with Nirvana when they were in their prime? It’s because I had to wait for an article in Spin Magazine to learn more about Kurt. My kids (and anyone else’s kids) can stream, YouTube, Google, (and everything else!) to find lost recordings and random facts.

And, sidenote: if being passionate about learning is a homeschooling thing, what about the moms who message me complaining that their kid doesn’t want to do anything but lay in bed all day?

5. I’m often told that my kids appear to be happy and mature and responsible. Which is always nice to hear, so thanks.

And yet, I look at my kids’ friends—many of who are not homeschooled—and I think the same about a lot of them. I can also say that over the course of our homeschooling journey, there have been a few homeschooled kids I’ve admittedly steered my children from hanging out with because, well…not happy, mature, or responsible.

Are my children the way they are strictly because of homeschooling? Has homeschooling made them who they are today? Do their strengths, weaknesses, interests, and their way of conducting and interacting with life come directly from our choice to homeschool? Would my kids have been the same if we’d put them in public school in kindergarten? I don’t know. I just know that homeschooling is what we chose and—even all these years later—we like it.

And really, that’s all that matters.

So that’s why it works. 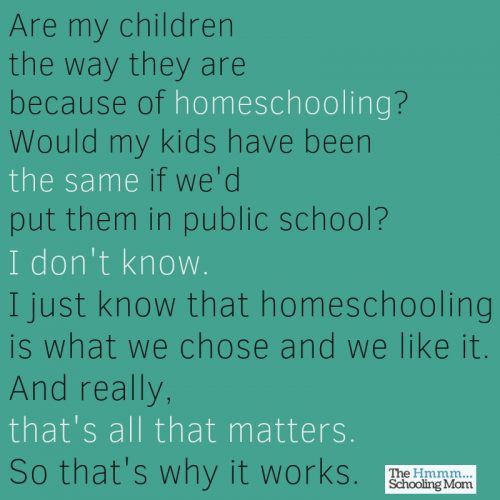 Homeschooling works. And other things do, too.

This doesn’t have to be either or.

This doesn’t have to be in comparison to.

Maybe the question should be is homeschooling another viable option? Would that maybe take some of the stress out of the decision to homeschool? To know it doesn’t have to be the be all, end all and that it’s just one of several things that could work?

I mean, a Chevy doesn’t not work just because a Ford or a Dodge does.

In all honesty, lots of things work. Homeschooling works for us because it’s what we chose to do and it hasn’t failed us. 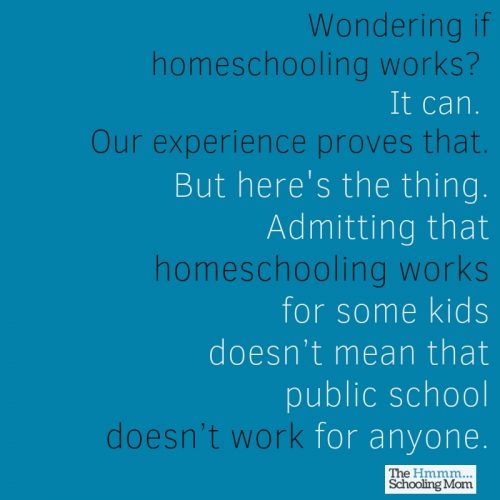