It’s common in the homeschooling community to hear parents say they are choosing to delay teaching their kids some educational element because they are of the belief their kids will learn it when they need it.

And sometimes that works out just fine.

But I wanna have a little chat with you before you haul off on the my kids will learn it when they truly and actually need it path.

In 5th grade, I discovered theater. Thus began my journey into I’m going to be on Broadway and I threw myself into the local theater system.

Now, seriously—I could sing and I could act…but I had no experience in dance. But hey, all I had to do was take some dance classes (because I finally needed them) and I’d be the triple threat that every musical theater wannabe wants to be.

But growing up, money and time were tight so dance class wasn’t an option. I muddled through whatever dance steps were assigned in the local (and bigger!) theater shows and I did well enough to get by, but every so often a director would suggest taking actual dance classes.

I watched my other theater buddies faithfully trek off to dance class and I vowed, “I’ll catch up when I’m older. I will totally do this.”

Well, here’s the thing. They’ll learn it when they need it isn’t always true.

Whether I wanted to admit it or not, there is a huge difference between someone who has been taking dance since they were 3 and someone who started when they were 18.

Just because someone has the need, desire for, or interest in something doesn’t mean they have the immediate ability.

If desire or need equaled ability to learn, I would remember how to change oil. I would understand knitting. And I’d be able to read music and tablature.

Saying a child will learn it when they need it infers there is a shortcut of sorts, as in people who start off earlier really don’t need to start so early. And sometimes that’s true.

But sometimes it isn’t.

Might it be incredibly insulting to those who are struggling through a concept that your child will supposedly hop right in and learn simply because they finally have a desire?

Perhaps. Try talking to the parent of a child who truly wants to learn something and just. can’t. get. it.

Learn it when they need it also assumes ease—as in, if my kid wants it and needs it, they will either

For some kids this might be true. For others, not at all. People give up all the time and wonder how things might have turned out if they’d pressed on.

The crazy thing? They’ll learn it when they need it isn’t used for every subject. Just tough ones.

The funny thing is that I most often hear they’ll learn it when they need it in reference to a) math or b) writing.

I’ve never heard anyone say, “I’m not going to play Mozart for my kid because they don’t need it right now.”

I’ve never heard anyone say, “let’s not do to this art museum/hiking trip/science experiment. My kids don’t really need it right now.”

Or, “this art/play/field trip is over their head. I’d better wait until later.”

We don’t tell a kid, “I know you love Greek Mythology but there’s absolutely no solid reason for you to learn it right now. Let’s wait until you need it.”

Nope, this learn it when they need it usually seems to be reserved for math and writing.

Since most of us are not second generation homeschoolers, I’m going to assume we all have a basic knowledge of algebra, how to write a paper, and other such things. When we say to a kid, “you’ll learn it when you need it” we forget what the kid doesn’t actually know yet. We forget our point of reference is completely different than theirs—especially if they’ve never been in public school.

Learn it when they need it? What do the kids think?

I will always remember sitting in a conference with a panel of homeschooled graduates who were talking about their experiences entering college. One girl admitted her mom had never taught her to write a paper, and explained she’d been told, “You’ll pick it up how to do it when you actually need it.”

When the girl got to college, she not only struggled with the changes that simply came with being in (gasp!) public college, she struggled with having to figure out how to write an actual paper—something her peers were either breezing through or at least had a reference point as to what the process looked like.

The freedom for homeschoolers to learn it when they need it had backfired a little bit for her. And she made it clear she wasn’t happy about that.

Will they learn it when they need it? What is our responsibility as a parent?

Now, I have no clue what my kids are going to grow up to be. But as mom, I feel it’s my responsibility to send them out of my house having a fighting chance.

I would feel horrible if one of my sons felt unprepared or at a disadvantage to his peers because of something I failed to put in front of him at some point in our time together.

Not everyone who is exposed to composition, algebra, etc., is going to excel at it or even like it. But there is a huge difference between having some sort of knowledge about it in your back pocket and needing it and having absolutely no clue.

You can’t say you want to expose your child to all that the world has to offer, and then conveniently neglect to show them certain things (like upper math or advanced writing skills).

Homeschooling is awesome because we have the opportunity to show so much of the world to our kids. The world is big and wide and amazing—let’s make sure our kids get to experience as much of it as they can while we are in a position to provide the opportunity for them.

Yes, even math and writing. 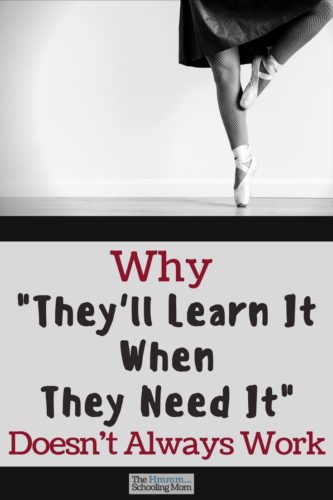