Parenting is Hard: 9 Reasons Why

I always knew I wanted to be a mom. I envisioned it as a blissful, magical thing of helping to raise up a generation of Awesome. But if we’re honest, there are a lot of things that aren’t on your radar until you actually enter the world of momming—things that make you realize why parenting is hard.

Here are nine of them. Get ready to nod your head.

Parenting is hard #1: Everyone knows more about how to raise your kids than you.

Doesn’t it sometimes seem everyone that doesn’t experience life within the four walls that you call home thinks they have all the answers? And when their answers don’t work for your child, they’ve always got a reason?

Which, by the way, is never: Sorry, I guess my suggestion didn’t work because really, I don’t know your situation. It always comes off more along the lines of, Well, if you were a better mother you probably wouldn’t be dealing with this.

It doesn’t matter if your kid is 15 days old or 15 years old—everyone has an opinion, and most people don’t have a problem sharing it with you.

You may also enjoy…Why You’re Not a Bad Parent 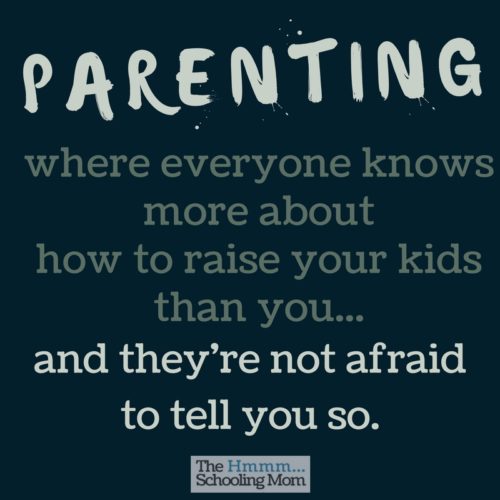 The funny thing about parenting is that we really think we know how we’re going to do stuff after the baby comes. Or when the baby turns 4. Or 16.

We know how things are gonna be. Right?

And then it happens. We become the parent of a baby or a 4 year old or a 16 year old—and everything we said we wouldn’t do, we totally do. Everything that we thought would work, doesn’t.

Parenting is hard #3: Kids aren’t carbon copies of each other.

Wouldn’t it be easier if they were?

Someone once told me, “one kid is a piece of cake, but two kids are not two pieces of cake.”

Which makes total sense because now because you somehow get your first chocolate cake child figured out, and then the next one comes along—a red velvet cake, drenched in pickle juice, filled with macaroni and cheese, and frosted with Crisco.

Parenting is hard #4: It’s the only job we’re allowed to have where we totally don’t know what we are doing.

I remember carrying around a sack of flour in junior high to learn about the responsibility required to care for a baby (and thereby steer me from the perils of teenage pregnancy).

While that itty bitty flour sack got heavy for my 7th grade arms the three days I carried it around, that flour sack never:

peed on a plant,

had a severe allergic reaction to a bee sting,

knocked out its brother’s tooth,

or told me I had a really flabby stomach.

I’m thinking of writing to that 7th grade teacher to tell him I feel the assignment failed me, not the other way around.

You may also enjoy…Independence, Mom Guilt, and How To Deal

Parenting is hard #5: Wine is expensive.

And as long as we’re bringing up our soothing vices, I think it’s safe to point out that chocolate peanut butter ice cream goes straight to your hips.

Parenting is hard #6: You can’t do it right.

Either you’re hovering like a helicopter or you’re free-ranging too much.

You’ve had too many kids or not enough.

You checked all the wrong boxes regarding your feelings on vaccination, breastfeeding, and how much screen time is too much.

You don’t know if you care.

Ergh. Parenting is hard. And we’re all probably trying too hard at all the wrong things.

As a disclaimer, I almost failed out of algebra, but I would have to say, in algebra’s defense, at least it has a formula with a solution that always works. As in, here’s the problem and here is how to solve it. As in, there is always a logical way to fix the issue.

Which is completely different than telling your kid not to eat stuff off the ground (to which he vigorously nods) and then having that same kid, a week later, pick up a rock because he thought it was candy and break his tooth.

Which actually happened with my youngest.

Oh, algebra. I miss you.

Parenting is hard #8: You can’t see the future.

There really is no way to know if how you’ve chosen to raise your kids will produce productive responsible adults until your kids become adults. Until then, you’re just punting and praying you’re right.

I mean, how do I know the choices I’m making now for my kid aren’t going to have him on the therapist’s couch in his mid-twenties?

I don’t. And I won’t until he’s in his mid-twenties.

Parenting is hard #9: Even though it’s really hard, you wouldn’t give it up for anything.

This is maybe the craziest thing of all.

Parenting sets us in the middle of a sort of chaos that you can’t describe to people who aren’t in it (and don’t have to describe it to those who are). It makes us completely nutso…and yet we wouldn’t trade it for anything. Because when the kids go away for the night and we’re left in a quiet house, what do we do?

We don’t know what to do.

And then what happens? We miss them. We want them back. We can’t wait until they’re home again, causing panic, chaos, and havoc in our sweet, crazy lives.

So there you have it. Did I miss any reasons that parenting is hard? Add your own in the comments.

email
Filed Under: Parenting
Tags: Mom Encouragement
The Mom Our Kids Really See
To the Mom Who Doesn’t Have a Tribe