Recently someone asked me what it’s like to be parenting older kids.

It all started when someone mentioned my oldest would be driving in the spring.

It caught me off guard. I mean, it’s not that I didn’t know he is almost old enough to drive. It’s just that it hadn’t been spoken out loud yet.

Forming actual words about the fact my oldest (and then a year later, my youngest) will be sitting where I sit in a car is weird.

It’s not heartbreaking. It’s not something I want to stop from happening.

Kids. They have this way of growing up.

I realized it recently when going through our Homeschool Stuff closet. It hit me just how much stuff we store that we are never going to have time to use. My kids are getting older, and there just aren’t that many more years left that I can claim Homeschool Mom as a title.

This stuff ends, you guys. It’s completely exhausting and overwhelming. And then it ends and you’ve got ten seconds of relief and then…?

And you hate it.

Sometimes my oldest comes into my office and stands behind my chair watching me work.

Do you need something? I ask

But he stands there.

No, really. If you need something…

But he never says anything. He just sort of hangs out and watches me write and listens to his music and I don’t know if I should ask him again or let it go.

I never know if I’m doing this right.

This is uncharted territory.

Have I mentioned that it’s weird?

Parenting older kids is weird, and I’m punting most of the time.

We’re changing roles. I’m less of a teacher now and more of a guide. And I’ll be honest, he’s been the teacher regarding many things I didn’t know I needed an education on.

Sometimes I go into his room and stand behind his chair and watch as he messes around on the computer mixing music or talking with friends or writing or researching or fixing some technological issue.

Do you need something? he asks.

But maybe my answer is actually yes.

Maybe I need him to tell me he’s going to stop growing. Or maybe I need him to explain why every day he looks more and more like his dad. Maybe he could give me some advice for parenting older kids or how to deal with all these parenting milestones that no one told me about. Maybe he could offer some clarification on how it is that I can be so excited for him to get older and yet so…not.

God—I can’t explain it. Does anyone out there understand this?

Maybe just give me the word for what this feeling is. Because all I can come up with is weird, and weird doesn’t cut it.

And none of this is wrong. None of it.

That’s just how it goes.

My oldest wants me to drive him around and look at Halloween lights.

We didn’t do this last year. October completely got away from me because I was busy. After we’d all spent Halloween night with friends, I scurried to drive us around in some neighborhoods, but by the time we were on the road, all the Halloween lights had been turned off for the evening.

He never said anything about it. Because he’s like that and he never would. He just put his earbuds back in and stared out the passenger window while I sat and wondered why my throat was tight with tears over people not keeping their stupid lights on later.

I’m not an emotional person, you guys. I’m so not that girl. There are very few things that I get weepy about.

It’s weird to come to the realization that the desperation and excitement in which my kids used to say mom look and mom come see and momthereisthisreallycoolthing is gone now—which is probably some sort of payback for all the times I only half listened.

Like a hypocrite looking back with rose-colored lenses, I miss the fact that at one point they were right there, waiting to hang on my every word. Waiting to tell me all the things.

There’s a certain finality that hangs over us now. Some sort of approaching finish line that you both look forward to and want to run away from.

And there is nothing wrong with that. Nothing at all.

That’s just how it goes. 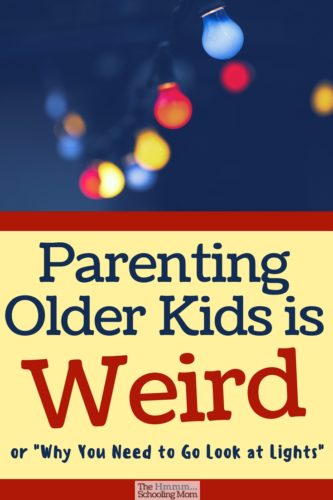 email
Filed Under: Parenting
Tags: Parenting Advice
Parents: Cut the Cord. It’s Not About You.
The Mom Our Kids Really See