When you announce you’ve chosen to homeschool, there is a question that follows about .03 seconds later: what about socialization? Ah. Good ol’ homeschool socialization.

Some people ask what about socialization because they’re genuinely curious, and you can have a great conversation with them about homeschool socialization. But there are other people who simply insinuate that homeschooled children will a) make a fool of themselves or b) make things difficult for other people by not being up to par with the rest of mainstream society.

My sons are now both high school aged homeschoolers, so we’ve had a decent amount of time to think on an answer.

We’ve also had some time to notice some oddities in why the homeschool socialization question is even asked—there are a few realities that I think are hiding in plain sight. But first, a couple explanations.

First off, what even is a well-socialized person?

It has been suggested by some homeschoolers that many people aren’t even sure what they’re really asking when they bring up the homeschool socialization question. So I thought I’d find out what exactly a well-socialized person is.

In a poll on social media (which was worded in a way so as not to call out homeschooling) here are the most common answers I received when I asked what traits make up a well-socialized person:

** Knowing how to politely conduct yourself in a situation with people who are much different than you (race, religion, sexual orientation, education, career, beliefs, opinions.)

** Understanding how to respectfully disagree with someone, and how to walk away from a conversation that heads south

** Appropriately engaging in a conversation with one or more people: eye contact, nodding, listening, responding, contributing

** The ability to pick up on social cues (which vary depending on the group/circumstance) to know if the way you’re acting is acceptable.

Why do people assume homeschooled children won’t be well-socialized?

For some reason, there’s still a big part of society that thinks the poster child for homeschooling looks like a quiet, sheltered kid who is unable to carry on a conversation and walks around with two left feet.

Homeschoolers are sheltered and locked in the basement or the closet, right?

Homeschoolers are quiet. Or weird. Or don’t know when to be quiet. That’s because of homeschooling, right?

No, actually it’s not. There have been quiet and weird and oh-my-word-will-you-please-stop-talking kinds of people since the beginning of time. I went to public school, and if there is some stereotypical way that homeschoolers act, I can think of many homeschoolers who were apparently hiding out at our public school.

Another reason some people think homeschoolers will have a hard time being “socialized” is because they’re thinking back to their own education. Many people remember school as the first place they were surrounded by people and therefore able to make a ton of friends. As in, without school, how would they have met anyone or learned how to act in a group setting?

Whatever the reason for the persistence in the what about socialization question, here’s what I really want to get it: for all this talk about homeschoolers needing to make sure they are “well-socialized” like all the fabulous wonderful people out in mainstream society…

Have you been in public lately?

We live in a world of road rage. Impatience with the cashier. Rude comments to the wait staff. People who loudly belittle their kids or their spouse in the bedding aisle at Target. And on and on.

And while I’m not suggesting for a moment that this is the status quo for 99% of in the mainstream public, you unfortunately don’t have to look far or listen long to experience it. I’m not saying society is doomed or that everyone is horrible and unkind or unable to act like decent human beings.

But, you guys. Seriously.

Why are my teens standing in the laundry soap aisle, uncomfortably listening to a woman rant about how stupid teenagers are because all teenagers everywhere are eating Tide Pods?

Why is a simple trip to an ice cream shop ruined by a group of teen guys showing off their machismo with faces and chuckles about other customers, profanity-every-other-word, and nasty comments about some girl they must have all known?

Why is the man in the car next to us sitting with his window open and screaming obscenities at the car in front of him?

Why is there a list of topics we can’t discuss in certain company because it triggers an actual tantrum?

Why are my kids wondering why the husband and wife are screaming at each other in the park?

Shall I go on? Or would you just like to add you own examples?

Now. If you’re going to tell me that the actions of Tide Pod lady and Ice Cream Shop Boys and everyone else had nothing to do with where they went to school and has everything to do with how they’re choosing to act in public, I’d like to say a) I completely agree with you and b) let’s apply that totally-makes-sense statement to homeschoolers as well.

There are people who don’t know how to act in public, and it wouldn’t matter where they went to school. You knew these people when you were younger, and you know these people now.

Better yet, have you been on social media lately?

From behind the safety of a screen, people bicker and call each other names and revert to tactics one would hope they stopped using as a little kid.

And I’m being asked how I plan to bring up a well-socialized homeschooler?

Sometimes I’m lost about where to look for examples in our “well-socialized” society.

A well socialized homeschooler actually can look like this.

But really. In all seriousness, I figure if my kids can:

be engaged in polite conversation,

excuse themselves from a conversation that’s going south,

do what needs to be done when they don’t necessarily want to do it,

respectfully disagree with someone,

conduct themselves in daily matters in the world,

and advocate for themselves when required,

And the thing is, I’m actually not sure that that has anything to specifically do with homeschooling. It’s just a kid/adult choosing to act appropriately because they’ve hopefully had it modeled to them by someone else. And it takes time. And it can be learned anywhere. Homeschooling, public schooling, private schooling, Rainbow Brite schooling.

You may think I’m overreacting. Maybe. But as a homeschooling parent who has heard what about socialization countless times, and then turns to see an obnoxious chunk of the mainstream public that doesn’t necessarily mimic the almighty “well-socialized individual”, it’s one-part exhausting, the other part incredibly frustrating.

And yes, we can refuse to get sucked down in the negative that’s around us. We can bring positivity and understanding and patience. And hopefully our kind of “socialization” can lead by example.

So, while homeschoolers will always and forever be asked what about socialization, perhaps one version of the best answer we can give is, “we’re hoping to do better than what we just saw on the news.” 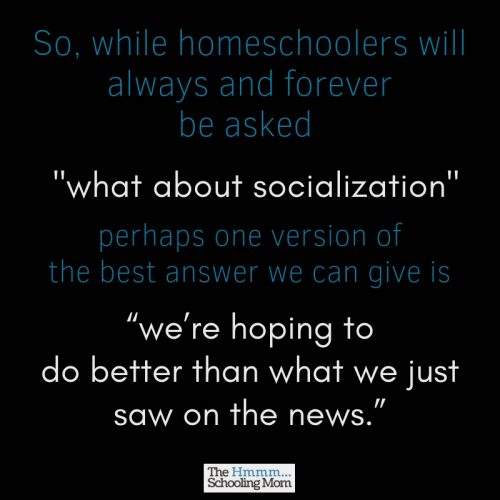