Selfies: Why We Shouldn’t Hate Them

I know. Selfies support all the yuck we’re told about our culture today – that we’re living in a world of self-centered, narcissistic, shallow souls who are needful of other people’s approval. After all, selfies are all about look at me, look at me!

And hey, look at me again!

I really don’t think selfies are about that.

My sons and I have taken up a challenge of trying to take one selfie together a day. We actually refer to it as an “usie” (get it? Us instead of self?) but it’s really the same concept—snapping a picture of the three of us doing something together that day.

Why does this even matter? Who cares how many pictures we are or aren’t in and who is even taking them?

Before selfies were a thing, we had…

I first started thinking about this when I realized how few pictures I have of my parents, my sister, and I—all together in the same picture—doing life. Why?

1) Back in the day, we mostly took pictures at family events.

We did not take pictures of normal life together.

There were no digital cameras, and a roll of film and the processing of the I-wonder-what-they-are-even-going-to-look-like pictures cost money.

So while we might have had pictures taken during birthday parties and family trips, it was not common to have a lot of pictures of people just hanging out together.

2) If there was a picture to be taken of our family doing something, my mom or my dad were generally behind the camera taking the picture.

When we wanted a picture of all of us together in front of the amusement park ride, the sunset, or the last bonfire of the summer, we had to find someone else to take it for us.

My, have times changed.

What are selfies actually saying?

Maybe I just look at this all differently, but I don’t see the majority of selfies as a product of a “me generation”. I don’t see it as a cry for attention.

What I see instead is look at this thing we did. Together. What I see is, look, we were here.

I think the selfie is actually about gaining independence in recording your own story. You don’t have to wait for someone else take a picture of you at the park or the new restaurant. You can do it yourself. (What I really need is a selfie stick like this!)

There will always be people obsessively posting duck lip pictures of themselves or with others for the “wrong reasons”, but I really think that for most of us, selfies have nothing to do with narcissism.

It has less to do with look at us, we’re gorgeous! and more to do with hey, we were here and did this.

A fellow homeschooling mom friend of mine (Jenn from Little House on the 100 Farm) did a Facebook challenge last year called Fight the Frump. She dared herself to spend one month actually getting out of her sweat pants and into something presentable. To make herself accountable to readers, she posted one selfie a day and encouraged her readers to do the same.

I thought it was charming idea. And while I don’t need to look like a movie star everyday, I really could use a kick in the pants to put on real clothes. So I was onboard with the project.

Other people, however, sent Jenn messages about how frivolous and narcissistic the project was.

Gosh. We always need to be against something. So…why not selfies?

Selfies are just another way to show your life and what you’re involved in. You can show the happiness, the chaos, the fun, and the crazy.

I don’t know about your kids, but mine appear to almost have an allergy to making a normal face in a picture. Maybe yours do, too? My advice is to just go with it. After all, you’re not going to run out of film, and you don’t have to ask someone to wait with the camera, while you’re trying to stand nicely and smile pretty.

And then take another one.

Your future self will thank you for not being afraid to turn the camera around and snap the picture of yourself and whoever else is there.

Take the selfies. Make the faces. Prove you were there.

The end and Amen. 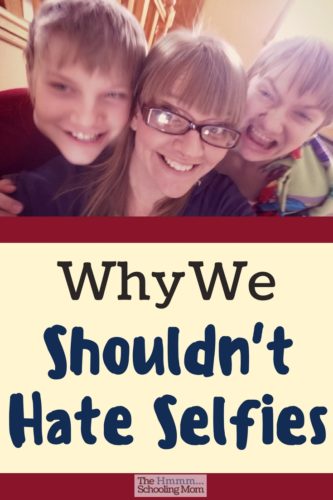