I’m the kind of mom who spends a lot of time in the kitchen. I love the kitchen. Give me a day to cook and bake from scratch and I’ll give you…well, a whole lot of yummy food. I love to bake bread. I love to make soup. I love to make desserts. And homemade caramel rolls? Yeah. Bring it on. I work hard in the kitchen, yo, and I’m not ashamed to say that I’m proud of the things that come out of it to feed others. But something recently happened that knocked me on my duff and showed me that I should stop trying so hard.

It all started with a pudding pie. I’d been baking up a storm for a couple get-togethers we were to attend the following day and suddenly realized we had nothing desserty in our house to eat that night.

No dessert? Gasp! I declare we must have a desserty offering!

Because the oven was in overdrive creating yums for the following day, I decided hey! I just happen to have the fixins’ for a pudding pie. A pudding pie is easy, and I don’t have to use the oven!

As I got out the ingredients it occurred to me that I didn’t think I’d even made a pudding pie for my kids before. I quickly got to work: I mixed up Vanilla Bean pudding for the bottom and Chocolate Caramel pudding for the top. On to the graham cracker crust it was all plopped in layers, and then into the fridge to set.

You guys, it was so easy…and so not something that usually comes out of my kitchen. And when suppertime rolled around, I realized I felt like I was kinda shortin’ my family. The oven had been spitting out carrot pie and crustless pumpkin pie and mint brownies and all the home baked things all day long…and now my family was getting something as quick and simple as pudding pie?

You know how you can get yourself into a tizzy just by over-thinking?

I might have even internally apologized to all of creation as I plopped the cool whip on top and served up each piece to my hungry guys. 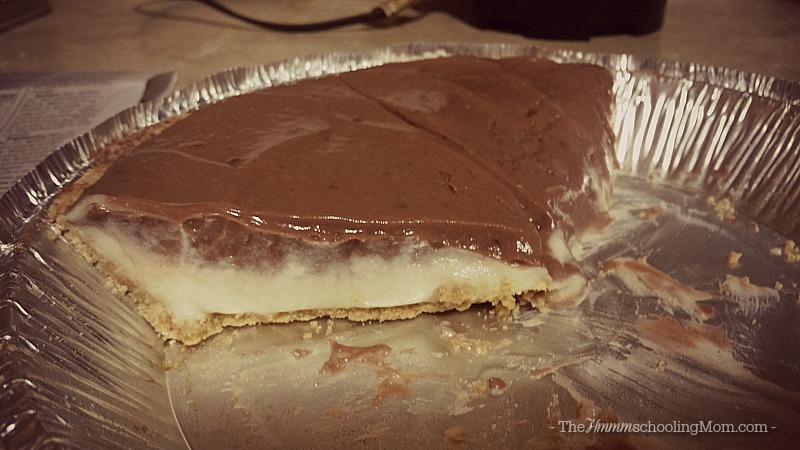 But my kids—thank God for them—have this way of busting through the muck of the stupid, senseless Mom things that I do.  And as the first bite of pudding-topped-graham-cracker hit their taste buds, I swear to Pete I heard them cry hallelujah.

“What is this amazing thing that you have served us?” they demanded to know.

First I blinked. Then I stared. Then I answered, “it’s just pudding pie.”

My kids. thought. it was. the best thing. ever.

There were raves and mmmmms and forks clanging on the plate and mom, this is so good, can I have another piece? They thought it was amazing. So amazing, in fact, that my youngest wanted the recipe so he could make the pie again. And as I told him how simple it was, I was almost laughing. By the look on his face, you would have thought I was revealing some long lost secret recipe for The Most Amazing Thing Ever.

And then it occurred to me that maybe I was. Like, maybe I’d discovered the recipe to Mom, Maybe You Need to Just Chill Out A Bit and Stop Trying So Hard All The Time.

(That would be a long title to fit on a recipe card.)

Mamas, hear me now: we need to stop trying so hard.

Girl, you do so much for your family. So. Much! You’re amazing!

But really, you can stop trying so hard. Know why?

My family has never once demanded dessert (or anything) from me. They don’t expect me to slave all day in the kitchen and present them with daily meals that would make Betty Crocker jealous. That’s my own made up stuff in my head; part loving to be in the kitchen, part wanting to impress my family with the time I spend there. 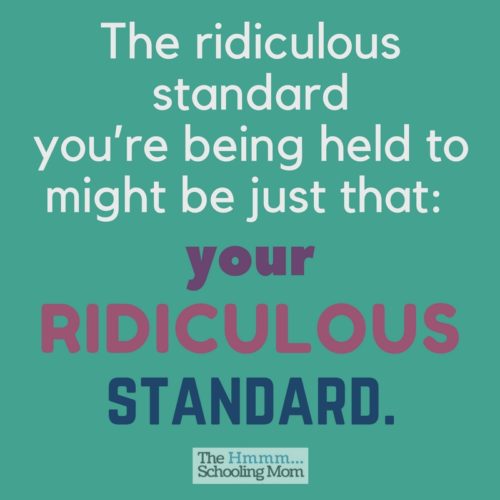 Are you working hard to make all the super involved cutesy projects when your daughter would be happy left alone with a coloring book?

Are you cutting your son’s food into his favorite superhero shapes when all he really wants is to have you at the table with him?

Let’s be honest: you might be working hard to do a thing for your family that no one in your family realizes is a thing—and that does not mean that your family is clueless. It just means you’re speaking different languages. We don’t all find value in the same things.

If you’re getting some sort of satisfaction from the work, or it’s filling a need of yours, that’s great. But if you’re putting the extra work in because you think it’s what your family is wanting, it’s a good idea to find out if that’s actually true.

You might be spending your time scraping out a pumpkin to start a pie from scratch when your family is completely and absolutely enamored with instant pudding poured over graham crackers. 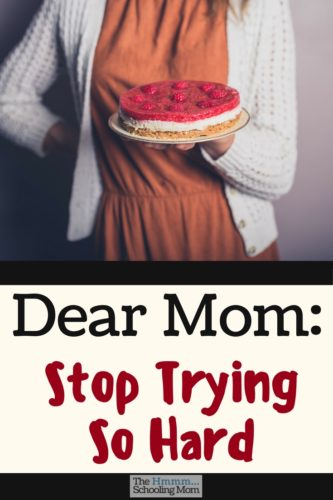 email
Filed Under: Parenting
Tags: Mom Encouragement
The Importance of One On One Time With Your Kids
Vicks in a Wax Tart Warmer Congestion Experiment