How Advantages of Homeschooling Can Backfire

Here are three benefits where I’ve noticed that homeschooling can backfire with a big ol’ boom.

1. Parents are in close proximity

A lot of homeschooling parents learn and experience and have fun right alongside their kids. They are often pretty involved in what’s going on—not necessarily in a helicopter parent kind of way—but let’s face it, a parent in close proximity usually comes with the homeschooling territory.

Mom or Dad usually aren’t too far away and are usually able to help or explain when it’s needed. No more waiting for 29 other kids to get their question answered before the teacher gets to yours. That’s the great part of homeschooling.

The thing is, though, Mom or Dad aren’t always going to be in the next room with a less-than-30-second wait to answer the question you have.

What this means is that kids who are sometimes used to only waiting 30 seconds to get the information their little hearts desire so deeply are sometimes shocked to find out that it’s not the status quo of the World Out There.

So yes, I get that we are right there and can help them, but it is totally okay to let them struggle through the math problem for awhile instead of running straight to you when the formula freaks them out.

Teach them to find the answers on their own—not just to things they’re interested in (which is what we generally don’t have to worry about!) but to the things they don’t really care about or might even (gasp) hate to do. Independence is a great thing!

Help them to put that computer in their pocket to work for them. Because even though you’re right there to answer their questions now, they need to understand that’s really a luxury compared to how the rest of the world works.

If you think about it, the act of choosing to homeschool is built on the foundation of flexibility. The simple fact that someone chooses to homeschool means they were taking advantage of having the flexibility to step away from what the majority of folks are doing.

I probably don’t have to point out that homeschoolers are known for being able to change the what and how and when and where of their learning around.

Why? Because they can. And it’s great.

Our schedules can, if we wish, be somewhat late and lazy—or at least really flexible! And because our days are usually spent around family or other homeschoolers, it’s generally considered “part of the territory”.

It’s great that homeschooled kids have the opportunity to get the sleep that public school kids might not be getting, but let’s be honest—there are things in life that start early in the morning.

A kid who is used to not having to get up for school until 9 (or noon!) can sometimes be a pill when they have to get up for something at 7 am. They think the world is against them and they mope around because ohemgee, 7 am, not realizing that 7 am would still be considered sleeping in to most public school kids (at least around here).

Waking up to do things when you’re tired is part of life and yes, people eventually learn to do it. I mean, we all have alarm clocks on our phones and we figure out how to live life with them.

But here’s the thing that many parents fail to realize. In the middle of your kids learning to live life with an alarm clock, you’re the one who has to deal with their less than awesome attitudes.

So, yes. Take advantage of the late and lazy schedules we can keep, but let’s also keep in mind we’re releasing our kids to world that doesn’t necessarily operate on that timeline.

3. Ability to deal with illness

As homeschoolers, we can get through so much stuff so much faster than folks in public school (for the simple fact we aren’t teaching 29 kids at a time). That’s not to say that we’re always speeding through stuff, though. We’ve got the freedom to dig as deeply into a subject as we want.

At our house, if the kids wake up feeling less than awesome, we generally skip our plans until they’re feeling better. The theory goes: why try to explore or give information to a kid who doesn’t feel good, when you have the freedom to give them the day to rest and get back at it tomorrow when they are feeling top notch?

Most homeschoolers know that even if you shove today’s intended lesson in with tomorrow’s lesson…or next week’s lesson…you’re still not going to have a ton of trouble “catching up”.

As awesome as it is to be able to hang out in bed if you wake up and you’re feeling a bit of yuck, the reality of adulting is often suck it up, take some ibuprofen and get on with it. 99% of adults know that you can’t just not do the thing simply because your pounding head or your stuffy nose says it doesn’t want to do the thing.

When a kid grows up with I’m feeling a bit off so we’re not doing school today, they are often surprised to find out that even if they’re feeling a bit off, they could still (gasp!) be worship assistant at church or show up for shooting sports practice or mow Grandma’s lawn.

We need to be careful about the reality we’re building for our kids. Although it’s wonderful that we don’t have to stuff our kids with information if they’re not feeling the best, we need to also help them realize that they would still survive if we did.

What about you? Have you seen other ways that homeschooling can backfire? Leave your ideas in the comments. 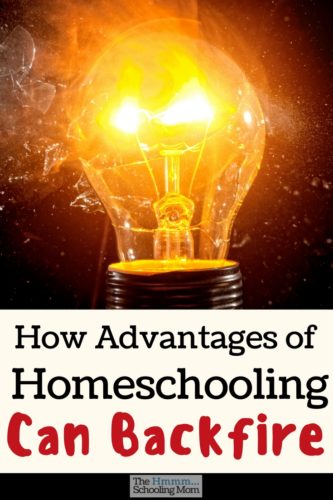 Check out my book about homeschooling. It’s a like a cup of coffee and a chat with that friend who will tell you what you need to hear: The Homeschool Highway: How to Navigate Your Way Without Getting Carsick

email
Filed Under: Homeschooling
Tags: homeschool advice
Self Worth: 5 Things Moms Should Not Base Theirs On
Reasons to Homeschool: The ONE that Mattered to Us