10 Things I’ve Been Called in 10 Years of Homeschooling

Upon reaching the decade mark in our homeschooling journey, I took some time to reflect on the many things I’ve been called over the years. The irony is that for every thing I’ve been called, I’ve also been called some thing that is completely the opposite.

Confused? You shouldn’t be. Because I’m willing to bet that if you’re a homeschooling parent, you’ve probably been called many of these same things, too.

And that’s fine. I mean, you do you. That’s the whole point.

But those are not stereotypes that my family falls under.

I once had someone assume that my kids didn’t know the song playing at the ice skating rink because it wasn’t from the local Christian station.

I’ve been asked if we have a television. I had someone ask if my kids had heard of SpongeBob.

My kids blew people out of the water because they knew what a fidget spinner was.

(I mean, seriously. Are you people for real? Those things were everywhere.)

My family and I sometimes find ourselves between a rock and a hard place because although we are a church going family, our faith had literally nothing to do with our decision to homeschool. So while my kids can quote just about every Veggietales cartoon ever made…they could also quote Spongebob and Adventure Time and Regular Show. They do, in fact, know the words to songs on the local Christian station, but they also know the words to Metallica and Green Day.

Oddly enough, we are the only homeschooling family at our church. Some members of our church family assumed that because we homeschooled it meant we were more something or less something or looked down or up or sideways at everyone else.

Nope, we’re just people. Our reasons for homeschooling are pretty undramatic. And we put our pants on one leg at a time, just like everyone else.

And to be clear, for everyone who has called us naive or sheltered, you should know we’ve also been called…

I was told by another homeschooler that if she felt her kids needed some exposure to worldy things, she knew she could call us.

It was said with a chuckle that I wasn’t quite sure how to read, but you can be sure I got her point.

We impose no limits on technology. The humor we use in our home and the topics we discuss would not fly in the homes many other homeschoolers we know. We often chill out with our teens and talk about “stuff”, and some of isn’t necessarily appropriate or politically correct.

The world is big. My kids know stuff. And I’m okay with it.

Or when I give them a list of chores and (gasp) don’t pay them when they aren’t done on time. (And then (gasp) I make them do the chores again anyway!)

When they half-heartedly agree to do something and then want to back out, but I make them follow through on that something. Because, principles.

When I make my kids stop playing guitar because there is something else they actually have to get done.

But wait. How can I be too strict if I’m also…

I’ve been known to let my kids play guitar all. day. Long.

Sometimes I decide to take the day off for no reason. Many times, I decide we don’t have to learn a certain something at a certain time.

There are occasions where our household dissolves into dancing around the kitchen while we listen to Rage Against the Machine and bake cookies that have way too much sugar.

Homeschooling can be stressful, but homeschooling is not always the reason you might see me blowing off steam. I might be stressed out because we’ve run into an issue on our farm.

Maybe there is an unexpected bill to pay.

Maybe I’m out of coffee.

Are there rough spots in homeschooling? Yes. Please, sweet Jesus, don’t make me repeat ages 9-11 with my boys.

But are there rough spots in all of life? Most definitely, yes.

While some people think I’m stressed out because of homeschooling, others say that homeschooling makes me smiley, peaceful, and happy-go-lucky. People have even pointed out the fact that my kids seem pretty darn happy.

Homeschooling does make me happy. Most days. But there are other things that make me happy, like having enough money in our checkbook, being healthy, or getting enough sleep.

You will also find me pretty darn chipper if I’m eating pie.

Or if I’m sitting near an open bottle of my favorite wine.

I’m glad that our family is able to hang out as much as we can without having public school plopped in the middle of our day. But my kids have always had the choice to attend public school. And I’d like to think that if someday they make that choice, we will still be happy and cheerful.

I mean, clearly we would be. Because, pie.

I mean, it’s called homeschooling, right? So that’s where we spend most of our life, right?

We do spend a good amount of time at home, and we’re glad to have that option. We have been called shy (duh, because we homeschool, right?) and we’ve also been accused of not being as involved in something as we could be.

Choosing to say no to things comes at a cost, and it’s mostly paid in how people judge the way you spend your time.

I’m willing to pay that bill, though.

Heck, they can even keep the change.

The irony is that for the amount of people who have suggested we could be more involved in certain things, there are just as many people telling me, gosh! You’re so busy! or how do you have time for everything you do? or do you even have time to sleep?

The conflicting messages are enough to make your head spin.

When we’re able to vacation in the middle of the week or help out with a situation that comes up, the fact that we homeschool really gets the chance to sparkle and shine, front and center.

But there’s also been the snide must be nice to be able to change your schedule at the drop of a hat comments.

Tone is everything, folks.

The flexibility in both the way we do things as homeschoolers and our overall schedule is awesome. I love it. And we very often take advantage of it. But there are a whole smattering of folks who still accuse us of being…

In some instances where we aren’t able to change our plans at the drop of a hat, I’ve overheard,“you’d think with the flexibility of homeschooling that they’d be able to help us out.”

I will never be one of those at-home moms who assumes I’m being asked to help with something because the person asking thinks I’m at home eating bon-bons or painting my nails. I mean, that’s just crazy and dramatic. But sometimes it sorta feels like a mama just can’t win, no matter what she does or what choices she makes.

And maybe that’s the whole point.

I’ve been called a lot of things in the last ten years.

One of the biggest things I’ve learned over the last decade of homeschooling? You can’t make everyone happy.

The other biggest thing I’ve learned? It’s not your job to make everyone happy.

People will view your life as a homeschooler—or anything, really—through their own experiences, opinions, and name for the color of the sky. When choosing to homeschool your kids, you will hear conflicting messages, opinions, and estimations of what you’re doing and why.

And it’s okay. That’s not you. It’s just what other people think of what you’re doing based on where they are in life right now. 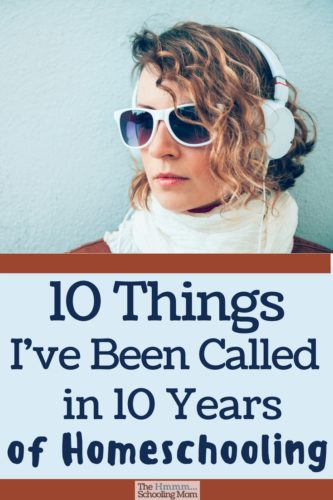 email
Filed Under: Homeschooling
Tags: homeschool advice
When to Change Homeschool Curriculum, and When to Push Through
When Dad is Against Homeschooling